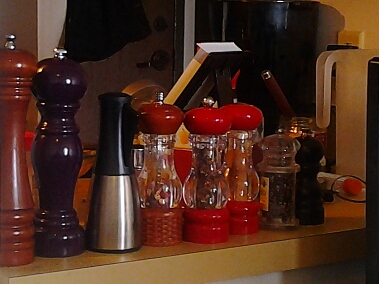 Living  a no-salt or low-sodium diet can be difficult at first.  When I was ordered to stop using salt in my cooking and at my table 25 years ago I remember it about killed me.  I remember thinking ‘if i’m not adding salt , then anything is fair game.’  I lived off of pre-made, boxed, bagged and canned food for years, not thinking of the sodium content.  After my kidney’s failed, the nutritionist told me all the former were now and forever, off limits. Then, while on dialysis, I was given a list of 30-40 foods that were low-potassium (now off limits) that I was allowed to eat.  It was then I bought my first vegetarian cookbook, “The Little Big Vegetarian Book” that I’ve talked about so much before.  They really emphasize using spices in cooking.  I eventually bought more and varied cookbooks, ready the introductions, the recipes and so on.

Now that you’re thinking of spices, and have read my first cookbook “Simple, Healthy, Fresh 1.0”, you’re wondering what else to do with them?  I’ve developed a line of peppers using spices, to enhance flavors while cooking and at your table. In the above picture, I’ve developed nine flavors and use two originals.  From left to right: Allspice Pepper, Rosemary Pepper, Mustard Pepper, Rose Petal Pepper, Red Pepper Pepper, Cayenne Pepper, Lavender Pepper, Orange Pepper, Lemon Pepper, regular pepper and Smokehouse Pepper.  Depending on what flavors you want to enhance, what cuisine you’re aiming for and what you crave, these can be a godsend.  Recently I talked about going salt-free for your health and substituting  dried citrus zest for salt.  My Lemon Pepper and Orange Pepper can be used at the table on most anything that you would put salt on.

They have really helped me and I know they will help you as well.

Your body will thank you.