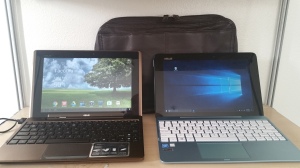 They both are slimline 2-in1 tablet computers, with multiple storage capabilities (SD card slots, USB slots), HDMI ports (that I’ve never used) and headphone jacks. The TF101 is the same thickness throughout while the T100HA is thick at the base and tapers off to a narrow end on top and bottom. The keyboards are similar, keys closely spaced that I like, having smaller hands. The TF101 is a bit more glitch and buggy, but that may have to do with the Android ecosystem. It has never been a smooth workhorse for me, especially with the earlier KitKat OS. The upgrade to Lollipop was quite helpful in smoothing out the bugs and issues but the small ram hindered the usability.

The T100HA with four gig ram is much smoother running Windows 10 but lags considerably when trying to multitask or open two or more windows on Edge. Edge itself is buggy, not quite as touch-friendly as Chrome but sips memory and processor power better. Windows is a smoother ecosystem than Android I’ve found in five years using smartphones and tablets, starting with Gingerbread to Marshmallow. But Windows has had decades over Android to smooth out more bugs and glitches. 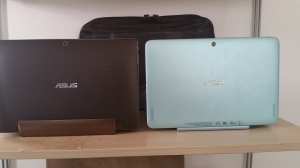 Overall, I’ve enjoyed the Asus brand Transformer Tablets. Are they perfect? No, but they suit my needs: lightweight, smaller keyboard, writing/typing programs, portable. I have a huge 15″ Dell for home and heavier workloads, though I have to upgrade the ram from 4G to 8G soon. It, too, is an older system, Dell compromised quality for quantity, as there are many bugs with the Dell 3542 as well. These computers and tablets suit my limited needs, as long as I don’t expect a $5000 machine in sub-$500 computers.