Official teasers rarely provide much in the way of detail, but this one from Nokia at least comes with a pretty picture. It reveals the rounded design language we have come to associate with the company’s latest feature phones, but with Z and Shift keys that imply we’re looking at a physical QWERTY handset rather than a candy bar — potentially something along the lines of the Asha 205. The picture is accompanied by a blog post confirming that this’ll be a product from Nokia’s Mobile Phones team rather than the folks behind Lumia, and that the announcement will happen at 7am GMT (3am ET) this Wednesday. The time zone is suggestive of an Asian or European launch, so it may or may not be worth setting your alarm clock.

My first smartphone was a Nokia 9500 Communicator back in 2006 or 2007. I wanted a phone with a physical keyboard but not a blackberryesque toy phone with candy chiklit keyboard keys. The Communicator was great! There were so many features (all locked by US carriers and not officially carried/sold in the U.S.) a full size keyboard with a large internal screen. 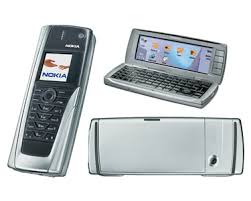 Even after five years of use, people were stopping me on the street, asking what it was.  “Is that the new iPhone?” , “Is that made by blackberry?”  They were all always so shocked when I replied, “No, it’s a Nokia business phone. I can fax, conference call up to five people, send and receive email, send messages, write documents, spreadsheets.  Oh and I can make calls, too.”  I absolutely loved it. Then Nokia began messing up their Hardware-software and over-pricing their phones. Finally, they abandoned their software altogether.

Which was a shame, as I would have bought the successor to the 9500, the E90, but there were too many negative points about it and it was vastly too expensive. Then came the last in the Communicator line, the E7. Cute, clicking and sliding, but even more expensive and fewer technical specifications. And expensive.

So, I hope the new Nokia, teased here in this Engadget article,

Is bigger than a chicklit keyboard sized phone.  And if it is moderately priced, I’ll gladly give up my tiny screen-only phone that mistakes what I type.