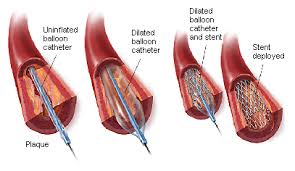 One month ago I underwent my third Angiogram and had three of these stents placed around the arteries and vein surrounding my heart. The procedure itself went find, although it took a team of cardiac surgeons and a specialist to place the stents (one using a new drilling technique). There were complications after the procedure, I lost blood, medications were mismanaged and bruising/pain that still lasts one month later.

I had been exercising two, three hours per day for years prior, eating healthy (as my cookbook series, Simple Healthy Fresh, shows) so I was depressed, frustrated when I found I had clogged arteries.  The cardiologists said it was just a rare fluke, it sometimes happens and it did to me.  A combination of heredity, bad DNA and sudden onset. Tests months prior had shown clear arteries and veins then boom! Almost needing emergency double bypass.

Not much I can do about it other than keep eating healthy and re-start my exercise routine all over, from scratch, again. That’s the great thing about exercise, you can start anytime for any reason.

You don’t need stents or a bypass to start.