The Big brouhaha lately over livable wages in typically low-paying McJobs has the whole world in a fight.  The owners are crying foul, they have no money to pay $15 an hour for jobs that have no higher education training, claiming they overpay as it is, versus the workers who are  working overtime unpaid hours to feed their own families on $7 or $9 an hour.

The fight has gotten so nasty that companies and corporate owners are saying, fine you want to push us to pay $15 an hour, plus benefits AND overtime pay, we’ll just replace you with self-ordering computers and have robots and machines that will make the food orders. 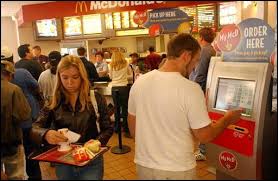 From http://money.cnn.com/2014/05/22/technology/innovation/fast-food-robot/index.html: In a widely cited paper released last year, University of Oxford researchers estimated that there is a 92% chance that fast-food preparation and serving will be automated in the coming decades.

With artificial-intelligence technology like IBM’s (IBM, Fortune 500) Watson platformmaking strides in advanced reasoning and language understanding, it’s not hard to see how robots could be designed to provide more sophisticated interactions with restaurant customers than kiosks can manage. 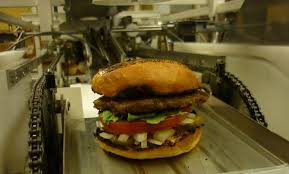 So while protests and boycotts are racing across the world, companies are replacing those workers with machines and robots that won’t ask questions or demand higher pay.  While I don’t eat fast food anyway, I can’t help feel for those workers.  There just aren’t decent paying jobs for low-training like there used to be decades or a century ago.  Gone are the manufacturing jobs, cleaning jobs-most anything is automated or replaced by new technologies.

Something needs to happen to make living more equal between the haves and have-nots.