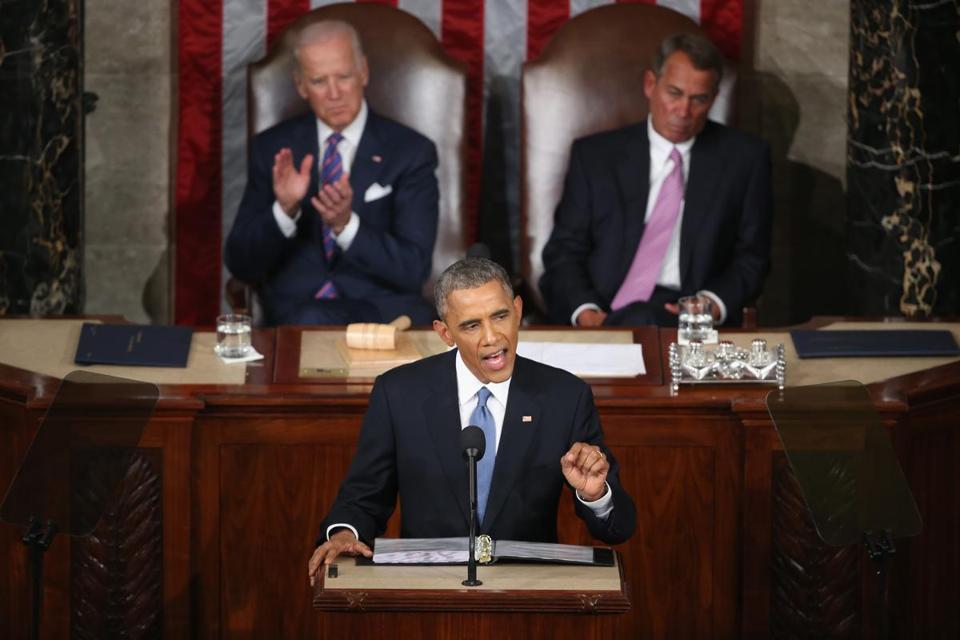 The more things change, the more they stay the same, or the saying goes.

Last night was President Obama’s State of the Union Address to congress and the Nation. Sure, a lot of rhetoric was used, but now we see a stronger President, with a backbone, biting words to an uncooperative congress. Vetoes were threatened, Executive Orders were promised and Republican talking points were withered.

This President Obama hasn’t been seen for six years and it was high time he cam out to play. Long gone is the President that has rolled over, playing dead and showing his belly for Republicans to kick and punch. The President has goals and now isn’t afraid to use whatever is in his power to get them done. America and Americans of all stripes need to get back on top of the world.

We have crumbled infrastructure, we are a laughing stock in high speed rail, we are way behind in new solar, wind and alternative energies. The Middle Class has been non-existent, thanks to a regressive, monetary-motivated Congress that doesn’t like anything that corporations and ultra-rich doesn’t like. Now President Obama is leveling the field, with the rich paying their fair share of taxes (the poor are paying 30% in cumulative taxes, while the wealthy pay approx. 7-11% in taxes). Corporations no longer able to hide behind tax loopholes, have offshore headquarters or have 0/100% tax rates.

With this New Deal for the 21st century, more people will be able to pay mortgages, bills and have money to buy healthy, nutritious food for their spouses and children. With higher education reform along with free community colleges, graduates will no longer have lifelong crippling student loan debt and able to get their own American Dream. The American Dream should be available to everyone, not just the 1%.

History was made last night, a President announced that the new civil rights movement is about Gays, Lesbians and Transgender Americans. We should have the same, exact freedoms that heterosexual Americans fully enjoy. Marriage across all 50 states, equal opportunities in jobs, housing, healthcare, education without fear of reprisals or threats. We matter. Soon there will be Federal protections fully available for all LGBT Americans.

This State of the Union was a historical, life changing occasion.