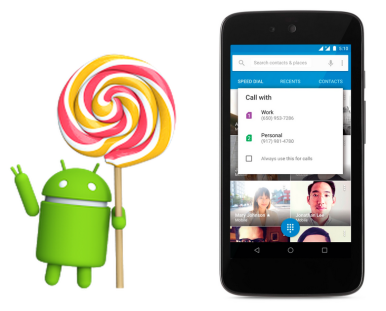 New features and updates to those getting the bump:

Android 5.1 – an update to Lollipop that improves stability and performance and offers a few new features like support for multiple SIM cards, Device Protection and high definition (HD) voice on compatible phones.

Whether you want to share your phone with a family member or better manage your mobile costs, Android Lollipop 5.1 now lets you use more than one SIM card on a device with multiple SIM slots. http://officialandroid.blogspot.com/2015/03/android-51-unwrapping-new-lollipop.html

The quick settings panel has been polished up a bit in Android 5.1. Each of the icons now comes to life with a new animation when you tap it. What’s more, it’s now easier to hop between Wifi access points and Bluetooth devices with the new dropdown arrows next to these settings.

HD voice already working for some folks on T-Mo — and occasionally experienced it for ourselves on some European networks using the Nexus 6 — Android 5.1 makes it nice and official, and built into the OS. Nexus 6 users on T-Mobile and Verizon (when that version of the phone launches) will be able to enjoy higher-quality voice calls when the 5.1 update arrives.

Android 5.1 brings some much-needed clarity to Lollipop’s somewhat confusing screen pinning feature, which was designed to make it easier to lock kids or guest users into a particular app. The initial page of instructions is a bit clearer, telling users to scroll up to see the “pin” icon.

Google has, however, made some tweaks to the volume and interruptions slider in the new Lollipop release.

“None,” “Priority,” and “All” are now accompanied by their corresponding icons, which should make it easier for new users to relate these to their status bar icons. And when enabling “None” or “Priority” mode for a specific time period, you’ll see the exact time it’ll be enabled until.

Keep check on who the lucky devices are here http://www.gsmarena.com/google_officially_outs_android_51_lollipop_to_compatible_devices-news-11481.php