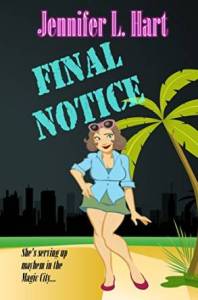 by Jennifer L. Hart (Author)
Partial Book Description:
FINAL STRAW
Dishing out bad news is Jackie Parker’s job until her boss grabs her assets one time too many and she serves him her notice and hopes he chokes on it. There must be a better way for a certified process server to make a living in Miami than working for a lousy lecherous lawyer. Whatever Jackie decides, her number one priority is spending time with her husband, Luke, preferably without his brother Logan—AKA the Dark Prince.
My Take:
Downloaded as a free kindle ebook.
Cute, punchy cozy mystery with a hint of feminism, a whole lot of time spent on sexuality of ‘women of size’-almost to the point of obsession. Hart does a over-eager job of driving the point home that ‘women of size’ are sexually wanted by everyone they ever meet, anywhere and at any given time.  Yes, we get it: everyone wants Jackie Parker, process server and detective. What that has to do with the mystery at hand, is anyone’s guess. Her husband wants her, the husband’s brother wants her, her ex-boss wants her, the delivery men want her. Moving on.
The main character, Jackie Parker, comes across as overly self-involved, her husband and brother-in-law as horn dogs that only want to hump her lumps and nothing else in their lives matter. Hart writes her friends as one-dimensional airheads, whose only purpose in life, seemingly, is to pump up Jackie’s ego or use her to their own ends.  So which is Jackie? A self-reliant feminist who doesn’t need anyone or anything, a sexually active sexpot whose charms drive every single man to their knees in lust, or a pushover who is weak-kneed to everyone else’s whims?
Hart can write a tale, there isn’t a whole lot of over-exposition involved, i loved the warehouse scenes and the murder sites were well-written. The plot itself was a bit thin and could have used more planning. I would suggest bringing Jackie et al back down to earth, giving them depth and work on plots, sub-plots a bit more. I give 2 1/2 stars.