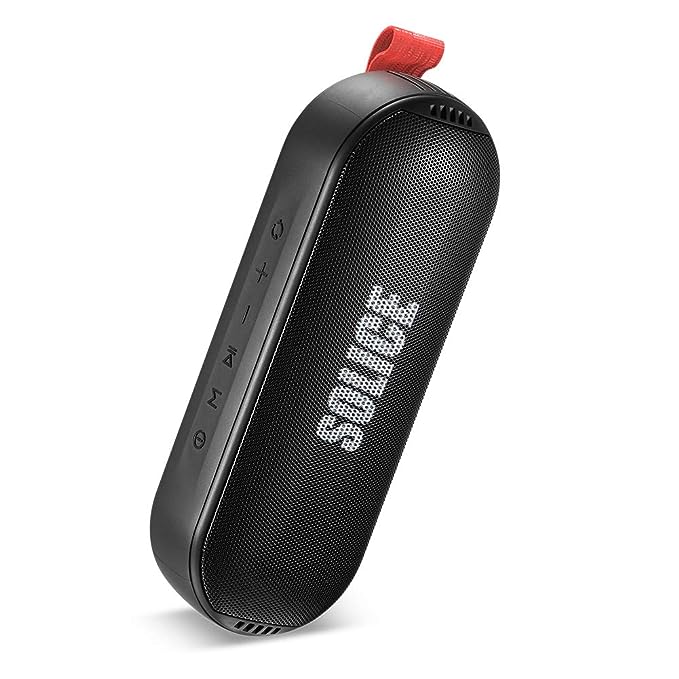 The Solice Speaker fits perfectly in your hand, has a carabiner clip to attach to most anything to take with you on the go. I immediately plugged in the charger but didn’t see an indicator. There is a blue light at the back, that wasn’t explained in the one page instructions. I left the speaker plugged in overnight to ensure it was charged. There are six raised icons on top of the speaker, the universal ‘on’ button at the immediate left. It took me longer than I’m willing to admit how much time it took too realize it needed a long, hard press to turn on. I thought it would be a one quick press. There is a sound indicator that the speaker is turn on.

Next is to turn on the bluetooth from which you are playing music or video from. I used my Note 8 and the speaker showed up immediately in the choices listed. Next I clicked You Tube and chose my list of 80s pop, turning the volume up. I’m nearly deaf and have to use the loudest setting and the speaker was equal to the challenge. The bass is good enough that the speaker began bouncing across the bar table and had to put it on a towel to stop it from bouncing right off the edge.

Since i’m hearing impaired, I do not use calling on my phone, so could not test the Mute button, but did test the stop/go function which did stop the music on my phone. There is a plus and minus button, that I thought was for the volume control. It is to go to the next or previous song, instead. last there is a repeat function which I did not test.

Overall, I was impressed with the Solice Speaker, there were a few initial miscalculations on my part that I felt could have been better explained in the one page instructions, but not overwhelming enough to not use. The 3 hours battery life is spot on at full volume and at 60% would give a much longer playing time. Depending on your needs, the speaker is a great option for party or personal use. You can purchase two and use both simultaneously for a stereo version.