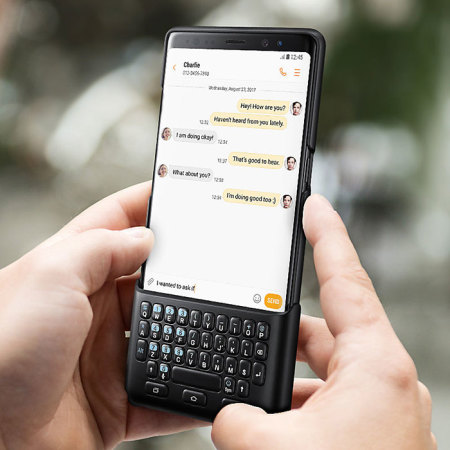 Samsung had been my go-to phone since Nokia stopped making forward thinking phones, my first being the Nokia 232, then 9500 Communicator finally the quirky, fun 7380. Then I moved to Samsung, first being the Exhibit, then the Note Edge (which I loved wholeheartedly!). I then bought a Gear S to go with the Edge and was in tech heaven. When Google and Tmobile sent out the update just after the Note 8 (my current and final Samsung) was rolled out, the Edge began crashing at whim, forcing me to upgrade.

I’m nearly deaf and cannot hear on phones. I rely on IM, Text and Email for sole communication. The onscreen keyboards are horrible. The keys are too close together and my fingers mistype. The talk-to-text does not recognize human language, forcing me to spend way too much time correcting the little bugger than if I had a physical keyboard.

Thus, began my hunt for the Note 8 keyboard cover to help me type messages, along with social media (facebook, twitter, linkedin). What I found instead, was a stonewall in every direction. TMobile immediately washed their hands entirely, saying ‘contact Samsung’. Which I did. I contacted Samsung all across Twitter, at all their accounts. Samsung Support did deign to communicate, but ended up saying they couldn’t even find what I was even talking about. I sent the picture from their galaxy note 8 webpage, they then said they didn’t sell it, to contact Samsung ECommerce.

I found a webpage contact form, filled it out, saying i’m deaf and would like to purchase the keyboard cover. They emailed back saying that wasn’t their department, to call another number.  I replied, i’m deaf, as I originally stated, I’m unable to call, thus why I messaged them. Why is it so difficult to find anyone in the entire Samsung organization to sell me a product?

Another reason the Note 8 is my last Samsung, is the software updates. Or lack thereof. What the big three do (Google, Samsung, TMobile) is, they’ll rollout a new phone JUST as a new OS is rolled out as well. You pay about a grand for a phone, through a carrier, with the previous OS, as in the Note 8 had Nougat out the box, then Oreo was rolled out; this counts as one of your two ‘free OS upgrades’. Then, a year later, the Note 9 rolls out a few months later, not giving anyone the chance to even use the Note 8.

When Google creates a new OS, as in Pie, they’ll roll it out to every country but the US. TMobile does whatever it does to Pie, then sends it out to other countries except the U.S.. I, for one, am tired of the games that these three companies play, taking money from United States countries, then keeping the updates and upgrades from us.

I’m moving on, I need a physical keyboard, being deaf. Samsung isn’t going to help. I’m not paying over a thousand dollars to be ignored and treated like a second class consumer. I need an OS that works for me, unlike Google’s Android ecosystem. TMobile is the best for my needs, as a deaf consumer, a plan that doesn’t include calling. But, I’m tired of waiting a year after an OS is released to eek it out for users.